Shoot scientists with a shotgun

The Bad As Hog is one of the many vehicles in Jetpack Joyride, and is the fastest vehicle of all. It first appeared in another Barry Steakfries game called "Monster Dash". It's a chopper style motorcycle that Barry rides on. When in front on a scientist, Barry shoots with his shotgun and reloads it by spinning it around his hand like the Terminator/T-800 in the movie Terminator 2. He also wears a leather jacket. In 1.7 update, it gets a Hover Hog skin.

"You'll be saying "I'll be back!" all day with this lovely leather jacket, shotgun, and motor cycle ensemble." - The Stash's Description of Bad As Hog

"Upgrade your sweet ride by adding a coin magnet. All coins nearby will be attracted to your awesome set of wheels." - Buying Hog Magnet for Bad As Hog

"Just like the regular hog, only gold. Research shows you will have at least 23% more ladies swoon when compared to the regular hog." - Buying Golden Hog for Bad As Hog

"The scientist's quantum engine bends space and time to keep items aloft. What better way to use the technology than to look totally rad on a Hover Hog?" - Buying Hover Hog skin for Bad As Hog

To get a longer run, don't aim for coins at the top, instead use extremely short taps. If you jump higher than half the screen, you probably jumped too high.

Ghost Rider/Bad As Hog with the full Skeleton costume

Hog before Flash jumps in

Hog after Flash jumps in 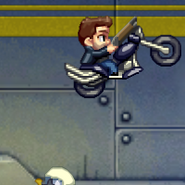 Close up of the Bad As Hog
Add a photo to this gallery
Retrieved from "https://jetpackjoyride.fandom.com/wiki/Bad_As_Hog?oldid=15501"
Community content is available under CC-BY-SA unless otherwise noted.