Tap to dive, release to ascend

Colossatron is an alternate skin for the Mr. Cuddles, it costs 60,000 coins. It was added to the game in update 1.7.

Purchasing this skin enables the user to buy the General Moustache's outfit (using real money or randomly through S.A.M).

Colossatron is the kaiju dragon from the app "Colossatron: Massive World Threat".  This skin also changes the design on the fire it breathes, and adds a "rubble" effect when sliding along the ground. A cone of displaced air is added in front of Colossatron's head; however, the cone remains facing straight forward, even when Colossatron is diving. In addition to the cosmetic changes, the background music also changes to the theme music from the Colossatron app; when Colossatron is destroyed, the music does not end immediately, instead adding a small, ending note sequence.

"The scientists enjoyed playing Colossatron on their phones so much that they decided to make an exact 1/4 scale replica!" 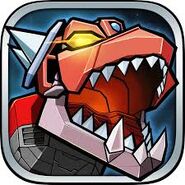 Colossatron
Add a photo to this gallery
Retrieved from "https://jetpackjoyride.fandom.com/wiki/Colossatron?oldid=15537"
Community content is available under CC-BY-SA unless otherwise noted.