Tap when arrow is in desired direction

Crazy Freaking Teleporter (also known as The Teleporter or CFT for short) is one of the vehicles that featured in Jetpack Joyride. It is a purple teleporter with metal (gold if the teleporter was upgraded to) parts on the top and the bottom.

If the player has the Free Ride gadget active, should the random vehicle be the Crazy Freaking Teleporter, then Barry will teleport into the lab instead of smashing through the wall, so the wall will not be destroyed. This will earn the achievement 'Another Way In'. If you get a best distance of over 800m in the CFT you will get the achievement 'Crazy Freaking Skills'. The "Crazy Freaking Teleporter" eventually gets going very fast and is the 2nd fastest vehicle in the game next to the Hog.

"The ability to teleport was finally realized by the legitimate scientists. Unfortunately it's range made it quite worthless." - The Stash's Description of CFT

When in action, it will point an arrow with Barry's silhouette at the end which moves up and down with a portal sign in the middle. Tapping teleports the player to that position. If Flash is present, he will teleport, too. Like other vehicles, the Crazy Freaking Teleporter gradually speeds up.

Missile is about to hit the teleporter 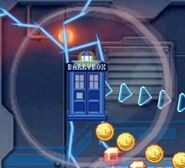 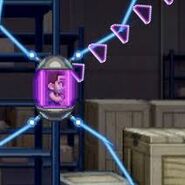 Close up of the Crazy Freakin' Teleporter
Add a photo to this gallery
Retrieved from "https://jetpackjoyride.fandom.com/wiki/Crazy_Freaking_Teleporter?oldid=14892"
Community content is available under CC-BY-SA unless otherwise noted.