Collects Coins, knocks over Scientists and has a Vehicle of its own (except Bad As Hog, Mr. Cuddles and the Strong Arm Machine (S.A.M.))

A robot dog who collects Coins, knocks over Scientists, and burns rubber. Best friends don't come any cooler than this.

Flash is a Gadget released through Version 1.3.5 update on May 24, 2012, together with the Dezapinator and the Turbo Boost. This gadget, in a form of a robotic dog, helps players by obtaining Coins and Spin Tokens and occasionally knocks over Scientists.

Flash is required to earn the achievement Walkies. Walkies: Take Flash on a 10km walk. This is obtained by traveling with Flash for a total of 10,000m or 10km.

Flash receives a miniaturized version of the current Vehicle the player is using, though this is not the case with the Bad As Hog or Mr. Cuddles, where it instead hitches a ride with Barry in the aforementioned vehicles. Also note that the color of the miniaturized Vehicles change when the Golden Vehicles upgrade is applied.

Flash as he appear in the Gadgets menu. 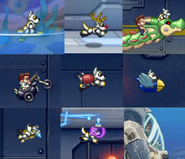 Flash on a walk with Barry.

Flash on the title screen waiting. 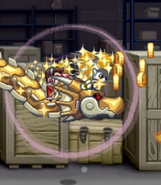 Walkies achievement obtained. Don't know why obtained in the Stash 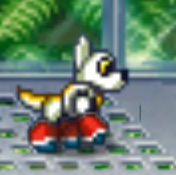 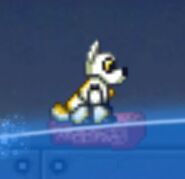 Flash riding a Sponge (when you use Bubbles)

Cite error: <ref> tags exist, but no <references/> tag was found
Retrieved from "https://jetpackjoyride.fandom.com/wiki/Flash?oldid=15515"
Community content is available under CC-BY-SA unless otherwise noted.