This article is a stub. You can help Jetpack Joyride Wiki by expanding it.

This Jetpack makes wind blowing sound when used (could also be interpreted as a ghostly wail) and the sound of candy hitting the ground, and shoots candy. The candy can't hurt Scientists, slow them down, or make floor sticky as the description says.

Jack O Lantern Jetpack in use

4.10.2013 when Jack O Lantern Jetpack was unlocked, this message was in news

Jack O Lantern Jetpack on his launch pad, note that this one is circle shaped like in Twister Jetpack 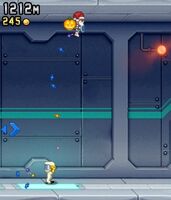 Jack O Lantern in-game.
Add a photo to this gallery
Retrieved from "https://jetpackjoyride.fandom.com/wiki/Jack_O_Lantern_Jetpack?oldid=12170"
Community content is available under CC-BY-SA unless otherwise noted.