Jetpack Joyride, categorized on the App Store as an Action and Arcade game, is a

iOS, Windows 8, Blackberry Playbook, Blackberry Z10, Android and Facebook game developed by Halfbrick and was released on November 6, 2011. It currently sits at #4 in the Action and Arcade Categories, and #24 in the top free with 36,905 ratings at 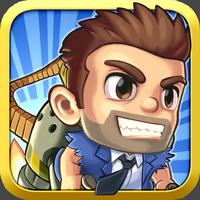 The app page describes the game by saying:

Suit up with a selection of the coolest jetpacks over made and take to the skies as Barry Steakfries, the lovable hero on a one-way trip to adventure! From the creators of the worldwide phenomenon, Fruit Ninja comes the action-packed Jetpack Joyride, Halfbrick's most anticipated iPhone game ever!

Jetpack Joyride is the winner of:

Jetpack Joyride is played by tapping, holding the screen, or on Windows 8, by clicking or pressing the Space Bar, to make the main character jump and slowly descend using the jetpack. There are many Gadgets and Items within the stage of the game, and the game itself is one where it must be played over and over again in order to progress.

Cloud backup and a new skin for Mr.Cuddles released in the version 1.8.

There are also Notifications.

Speeds of run (without using a vehicle):

60 kilometers per hour minimum (average speed of your run).

If battery power reaches 15% or less, you can still play this game. You cannot continue playing once it reaches low power (about 5% or less). You should charge the power as soon as possible.

Add a photo to this gallery

These Are Mission Modes The Ver 9.0 (Coming Soon)

Retrieved from "https://jetpackjoyride.fandom.com/wiki/Jetpack_Joyride?oldid=15565"
Community content is available under CC-BY-SA unless otherwise noted.