The laser jetpack is essentially a part of the laser beam obstacles that appear throughout the level attached to a strap to form a jetpack. It fires a continuous powerful red laser that seems to kill scientists unfortunate enough to be caught in its path.

The damage that can cause to the scientists is by burning them, similar to the Traditional Jetpack, Chrome Plated Afterburner, and the Blast Off Jetpack, but the scientists flip over and die after being burned. 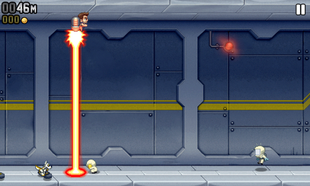 The Laser Jetpack in action.
Add a photo to this gallery
Retrieved from "https://jetpackjoyride.fandom.com/wiki/Laser_Jetpack?oldid=14982"
Community content is available under CC-BY-SA unless otherwise noted.