Jump through obstacles and speeds up to an incredible speed

Tap/Hold to jump, release to fall

Lil' Stomper is one of the many vehicles featured in Jetpack Joyride. It resembles a humanoid stomper-like robot and is largely red in color, with the exception of its hands and legs but appears gold in color with the Lil' Stomper vehicle upgrade. In 1.7 update, it received a Zombie T-Rex skin available for 50,000 coins.

Tap for it to jump, little tap for a smaller jump and hold for slower falling. This vehicle can collect a large number of coins even without the coin magnet, thanks to its large size. It will fall slowly if you hold your finger because of rockets in its hands.

"Express yourself in the most violent way possible by stomping around the lab!" - The Stash's Description of Lil' Stomper

"Now your terrible stomping rampage can be punctuated with the blissful sound of collected coins. Lovely." - Buying Stomper Magnet for Lil' Stomper

"Holy balls! Barry Steakfries riding a zombie T-Rex through a science laboratory is about awesome as it gets!" - Buying Zombie T-Rex skin for Lil' Stomper 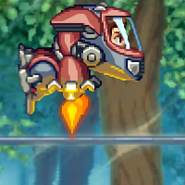 Retrieved from "https://jetpackjoyride.fandom.com/wiki/Lil%27_Stomper?oldid=14964"
Community content is available under CC-BY-SA unless otherwise noted.