Opens its mouth when it collects Coins

Tap to flap wings and get higher

The Profit Bird is a vehicle in Jetpack Joyride. It is a mechanical bird that Barry can ride. As it flies, money shoots out from its behind.

"It is scientifically proven that if you make a game with a bird in it, you will make a ton of cash." - The Stash's Description of Profit Bird

"Not what it sounds like. Birds already collect money like it's going out of fashion. Now you can collect even more. More!" - Buying Bird Magnet for Profit Bird

"Let's face it. If you are going to do it, you may as well do it right. Gold all the way, baby." - Buying Golden Bird

"Have a whale of time with this mechanical mammal! It's been well oiled with a rust proof finish!" - Buying Mecha Micro Skin for Profit Bird 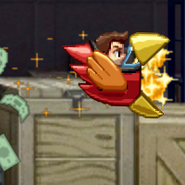 Retrieved from "https://jetpackjoyride.fandom.com/wiki/Profit_Bird?oldid=14966"
Community content is available under CC-BY-SA unless otherwise noted.