Super Head Start is a utility in Jetpack Joyride. It can skip the first 1500 meters and is 3 times more expensive than the original Head Start.

Tap the Super Head Start icon at the beginning of each game to travel the first 1500 metres. The icon will stay on the screen until you fly till about 70 metres so you can click it at about 65 metres to travel slightly further. You can tap the screen while using the Head Start to make Barry move higher, which can help him collect coins.You cannot earn it through Spin Tokens. Also, when used, the Coin Magnet gadget will be activated until the Head Start is done. After the recent updates (October/November 2016) you now purchase them directly before each of your runs instead of through The Stash, but you can still win packs of 3 or 5 through the Strong Arm Machine (S.A.M.), and Purchase prompt will only be shown if you have more than 750 coins. 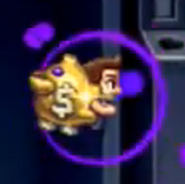 Activated
Add a photo to this gallery

Retrieved from "https://jetpackjoyride.fandom.com/wiki/Super_Head_Start?oldid=13157"
Community content is available under CC-BY-SA unless otherwise noted.